Are you or your sexual partner allergic to latex? That’s OK! You can still stay safe with a latex-free condom and there's plenty of non-latex condom options to choose from. Here's our line-up of the 5 Best Non-Latex Condoms available. According to the Center for Disease Control, latex allergies affect approximately 8% of the general population. In the healthcare industry, this statistic is even higher at 12%. How come? Overexposure to latex (wearing latex gloves all the time) can cause a histamine reaction to the material to develop, leaving you with a rash, hives, itchiness, swelling and labored breathing.

This being said, it’s also very common for a lubricant ingredient to be the real culprit in creating an allergy attack, especially spermicide or capsaicin. A professional can test you to see if you’re allergic to latex or if it’s actually being triggered by something else entirely-- like lube.

If you can’t make it to a doctor, you can do an at-home test. Try putting on powder-free latex gloves or wearing a latex Band Aid (make sure it is made from real latex, and not a latex substitute like PVC) for a half hour or more and see if a reaction occurs.

You may have noticed that I left the Trojan NaturaLamb, which is Sam’s (my fellow safer-sex enthusiast) favorite non-latex condom, off of this list. Why? They do not offer protection against STDs and STIs, only against unwanted pregnancies. Lambskin condoms have pores which allow the passage of viruses, bacteria, parasites and fungus. Therefore, I do not find them to be a true means of barrier protection, as they only act as a contraceptive. Ideal for those who rely on snugger fit condoms for protection against slippage, but need a non-latex condom, the Durex Real Feel is your best bet, as it's the snuggest one in the bunch with a 3.88" circumference. Adored by both the non-latex and no-latex-odor loving community, the super stretchy LifeStyles SKYN Large condoms offer a soft-as-skin feeling for those with more skin to cover. Unlike other brands (ahem, Kimono-- whose MicroThin Large condoms are smaller than their regular MicroThins) their large size really is larger than the regular SKYNs. This makes them a shoo-in for those who like the larger fit of the aforementioned NaturaLambs, but want protection against STDs/STIs. 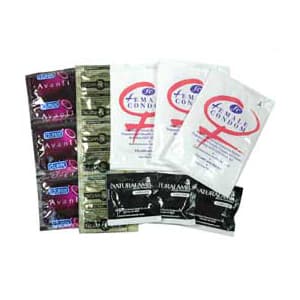 If buying every kind of non-latex condom seems like an expensive mission and you’d rather try them all out in one swoop, check out the Condom Depot Non-Latex Sampler. It’s got a variety of the best latex-free condoms for you to experiment with and eliminates the hassle of having to buy condoms individually.