What do I do if I'm allergic to latex condoms?

Q: My wife is allergic to latex. How do we have safe sex?

A: The first thing we always ask is, “Has your wife received a diagnosis for her latex allergy from a doctor?” The reason that we ask this is that there is a lot of thing that people with sensitive skin can find irritating about condoms and this way, we can narrow down the culprit. After all, you could be in for some trouble if you think it's a latex allergy when she's actually just having a reaction to a particular type of lube.

A doctor will give your wife a test to make sure it's the proteins in latex that are causing the concern and they may also give you some ways to treat the allergy or a list of products you should otherwise avoid. Seeing one is completely necessary before self-diagnosing.

If the answer is no, she should see a doctor and get tested. Apart from having a genuine latex allergy, she could be dealing with a lubrication allergy, or a reaction to spermicide. We’ve mentioned plenty of times that spermicide, also known as nonoxynol-9, is dangerous, but for folks with sensitive skin, it can be even more uncomfortable.

If it’s a lubrication allergy, you can look into getting any of our non-lubricated condoms. I am personally a fan of the Lifestyles Non-Lubricated. They’re no frills, but they are comfy and strong.

But if it turns out she is allergic to latex, she actually has a lot of awesome options in the condom world. The Female Condom (FC2): The most recent version of the female condom, also called the internal condom, and the only one currently FDA-approved, is made of nitrile, not latex. Nitrile is thinner than latex, and softer, and it doesn’t have that icky latex smell, which is a bonus even if you don’t have a latex allergy. The other bonus about the FC2 is that it is comes with a silicone-based lube, which is considered to be hypoallergenic, so if your wife is allergic to lube, she can still use this bad boy. Or girl.

LifeStyles SKYN: This is one of our more popular brands of non-latex condom out there. LifeStyles Skyn are made of polyisoprene, so they’re softer and stretchier than latex or polyurethane condoms, and they really do feel like skin. They are also lubricated with a silicone-based lube. They also come in a larger size, a textured variety, an extra-lube variety, and a sample pack.

Trojan Supra Condoms:Trojan’s Supras were made of polyurethane and are a great alternative to latex Trojans. You can use oil-based lubes with them, unlike latex or polyisoprene condoms, and they’re said to be particularly good at transmitting body heat. Some people find them a little stiffer than the SKYN, but they still have a lot of fans in the latex-free community. 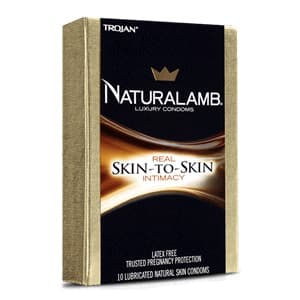 Trojan NaturaLamb Condoms: Because these condoms are made of lambskin, these condoms DO NOT prevent STDs However, if your only concern is preventing pregnancy, they may be a good option for you. People who like lambskin condoms swear by Trojan’s NaturaLamb because they’re comfortable, they conduct heat really well, and they’re actually pretty thin. In fact, they just so happen to be my favorite condom.

We’ve combined all of these latex-free condoms into our Latex-Free Sampler, so if you don’t know which ones would work best for you, why not try them all out?