I admit it openly and honestly-- I am a giant geek. My dad raised me right on Stars Trek and Wars. From there, it was a slippery slope to Harry Potter and Lord of the Rings. And now I’m a full-blown D&D playing, convention-attending, comic-book collecting geekasaurus rex. These are my favorite geeky condoms: Our Japanese Tin has nothing to do with anime-- but it will give you the same satisfaction as your favorite well-made series. There’s a reason that so many condoms on our World’s Best Sampler list come from the land of the rising sun. Japanese condoms tend to be thinner and more comfortable than those made by American companies, but they’re still just as safe. All of our condoms are FDA-approved, so settle in with your koibito and your favorite Urobuchi series on Crunchyroll playing in the background. My boyfriend and I are such big Game of Thrones fans (R+L=J is old news; now I’m all about the HS = HR!), when the Trojan Fire and Ice condoms first came out, we rushed out to buy them for the name alone. There were Dong Of Ice and Fire jokes abound. We don’t get out much. While these condoms may remind you of all the horrible sex acts that happen in the books and on screen, check out our consumer alert about their use of spermicide and capsaicin. 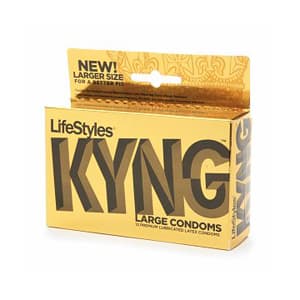 If you’re worried about the harmful chemicals but still want to be kyng of the Iron Throne, considered instead Lifestyles’ KYNG condoms. Available in their Gold or Blue brands, these condoms are roomy, comfortable, and best of all, contain a lube worthy of the king of the Seven Kingdoms. Perfect for preventing any Princes Who Weren’t Promised. Going on a weekend LARP and need period-accurate contraception? Did you know that lambskin condoms have been around for hundreds of years? Place a few Trojan NaturaLambs in your spellbook or right next to your mana potions so you won’t forget them and your sex life will be free of anachronisms. These are my favorite condoms out there, so remember that they aren’t effective at preventing the spread of STDs, just unwanted pregnancy. So make sure you’ve stopped by Ye Olde Clinic beforehand to have your phylactery scryed for pathogens, or pick another a more modern condom that has +3 to Disease Prevention.