Q: I ordered some condoms from you guys and they came in on Friday afternoon. I was gone for the weekend and didn’t realize that they were on my porch when I headed out.

The problem is that there was a big snowstorm this weekend and I’m scared that the condoms might no longer be safe to use. Should I be concerned? 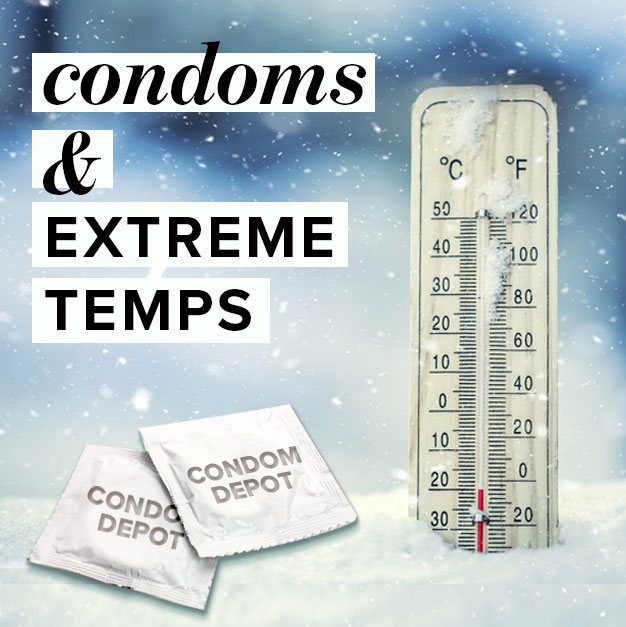 With how crazy this past winter has been, it’s no surprise that we’re getting frequent calls about the safety of keeping condoms at the right temperatures. And it’s a great thing because it shows us that you care about your safety. Rock on!

The fact is, cold can make a big difference in the quality of your condom. Extreme temperatures can make the material of the condom brittle and easy to break. Time is going to be your biggest enemy here. Driving them home from the store and leaving them out for a couple hours before you get home from work is not going to have an effect.

But leaving them outside, unprotected, over several days during a snowstorm is probably going to make our condoms less viable. Even if they're enclosed in a jar, like the World's Best Condom Sampler Jar. Long-term exposure isn't good, whether we're talking about heat or cold. There have actually been studies done on whether or not environmental factors like extreme heat and cold can lead to latex (and other condom materials) deteriorating and the answer, of course, is yes. If you’re insistent on using condoms that have been out in the cold, there are a couple things that you can do.

First, you can let them warm up. I’m not saying put them in the microwave on defrost. Let them get back to room temperature on their own by bringing them inside and storing them somewhere that's room temperature. If you immediately slapped one on and tried to go to town, the extreme shift from the cold of being outside to the warmth of being between two coital bodies would make it very, very likely that it would break.

Once they are back to room temperature, you can do a visual check. Is the lube (if they’re lubricated) frozen? Does it have the same texture and color of the lube you normally find on these condoms? Is there any damage to the condom’s package? You can also perform the water test by filling an unrolled condom with water and seeing if there are any leaks. We don’t suggest using the same condom for this and sex, but seeing if one is alright might be indicative to whether or not the others in the box are.

As always, try to store your condoms somewhere that's cool and dry-- in your bathroom, closet, or bedside table. Places like a wallet, pocket or car are always a bad idea.

But if you’re really, super-duper, 100% unsure? Don’t use them. Buying a new box of condoms is always going to be cheaper than an STD/STI test, or a pregnancy, and it’s going to cause you a lot less stress than having one break during sex.

If you feel condoms purchased through our store are unsafe for use after being exposed to extreme temperatures, you may contact our customer service department by visiting Condom Depot's Customer service site at www.support.condomdepot.com.

Condom Depot will process refunds on orders within 30 Days for a store credit.  This is available for condom packs of 50 or less. The credit is for the original purchase price minus shipping fees. We DO NOT offer cash or credit card refunds. Please see our Return Policy for more information.

• Why Do Condoms Break?
• Top 10 Most Common Condom Mistakes
• The Complete Guide to Condom Materials