We’ve all heard the many myths out there surrounding condoms. Watch out, rubber rumor mill, ‘cause I’m about to bust these top five condom myths! 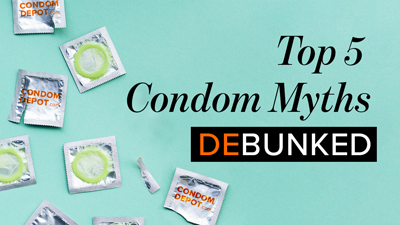 |  Related Articles:
• Why Do Condoms Break?
• Can I Use Coconut Oil as a Lubricant?

"Trojan NaturaLamb condoms do not protect against STDs/STIs."

Myth Busted: OK, so nearly every condom approved by the FDA protects against both unwanted pregnancies and STDs/STIs, but there are still exceptions.

Condoms made from natural membranes, such as NaturaLambs by Trojan, have pores in the material which are large enough for viruses, parasites and bacteria to transmit back and forth from partner to partner. These health-harming transmissions are most commonly known as STDs/STIs.

Lambskin condoms have been used as a form of contraception since the 1600s, but this was way before the days of government-regulated health devices and sex-related health threats such as HIV/AIDs. Therefore, if STDs/STIs are a concern in your relationship(s), STEER CLEAR of any condom made from an animal membrane!

Myth #3: Condoms Are Only for PIV (Penis-in-Vagina) Sex 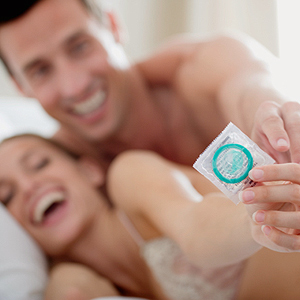 Thinking of using a sex toy or inserting any other porous object? Slap a condom on it, and it’s instantly non-porous. Hooray! Or, tired of jacking it and then having a big mess to clean up? Use a condom for easy clean up!

Myth Busted: People assume thicker, extra strength condoms are safer than extra sensitive or ultra thin condoms. This simply isn’t true. Did you know that the thinnest condoms, like the Okamoto .004 and the thickest condoms like Trustex Extra Strength both have to undergo the exact same electronic testing before being approved for sale by the FDA?

That’s right.They were both put to the same test, and they both passed. This means they are EQUALLY SAFE. 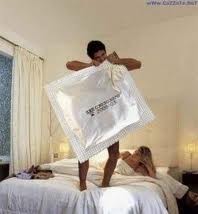 Myth Busted: If I’ve got one pet peeve in the world of safer sex education, it’s proper condom sizing. It is so incredibly important, yet so commonly a source of confusion, ignorance and stress. I’ve got over two decades of condom use experience and I’ve hand measured every single brand and style of condom in our expansive condom warehouse. Take it from me-- condoms come in an extremely wide range of widths, lengths and shapes.

If you break condoms, lose condoms inside your partner, they slide down your shaft, strangle you or simply find condoms to be uncomfortable, then guess what? You’re using the wrong condom size! Wearing the wrong sized condom is a recipe for disaster and can very easily lead to unwanted pregnancy and/or STDs/STIs. It doesn’t have to be this way!

To clear the myth once and for all, I made this Condom Size Chart to document the sizing measurements I collected. There are no normal sized or regular sized Trojan or Durex condom, people. Look at the numbers. They vary.

Nearly every complaint we hear from customers have to do with an improperly fitting condom (too short, too long, too narrow, too wide). Do yourself, your future reproductive health and your partner a favor by measuring your erection and consulting the size chart before it’s too late, because condoms are DEFINITELY NOT one-size-fits-all.