When your minuscule Spring Break clothes are leaving little to the imagination, it can be a little more difficult than usual to find a safe and concealed place to keep your condoms. But, in an effort to stay safe while wearing less this weekend, I tackled this condom storage challenge head on. After some brainstorming and some various bikini-clad beach testing, I came up with some viable options for carrying condoms during warm weather romps.

Don’t forget to use 'em or lose 'em though, because even after one day in extreme temperatures, a condom can lose its effectiveness. So, these are temporary and one day only suggestions. If you’d like to learn why, you can read this article about condoms and extreme temperatures. Whether you are sporting a bikini top, triangle top, sports bra, tankini or monokini, there is a way to bring a condom along for the ride inside of your top. For this sneaky maneuver, I recommend bringing a traditional condom, like the LifeStyles Ultrathin which has a regular sized wrapper. No need to have a condom with a gigantic wrapper like the Trojan Double Ecstasy sticking out of your cleavage. To employ this method, simply lean forward and tuck the condom in between the bottom band or underwire of your top and your underboob. Padded and/or lined tops will obscure the condom's outline, but if you’re not sure, check out your boobage in the mirror to make sure it’s concealed before heading out. Otherwise, you may be walking around looking like you have a third nipple. Sure, you could keep your keys or sex wax in that handy dandy boardshort pocket. Or, you could keep something in it to protect your love rocket. Just don’t do both, as this could lead to a punctured condom. If your pocket is mesh, wrap the condom in a bandana, handkerchief or some other type of opaque fabric before storing it in your see-through pocket (unless you just want to be a baller like that).

Tape It inside Your Hat Yet another awesome use for duct tape. Just turn your hat upside-down, and securely tape a condom to the crown area of your hat. This trick works equally as well with baseball caps and cloth sun hats. However, I found that straw hats are a bit problematic for this condom hiding tactic, due to the adhesive properties of tape being unable to securely affix to this loosely woven material. For the ultimate incognito experience, this method works especially well with black hats and black duct tape. During Spring Break,  the SoftFlop from Brookstone (or any other storage flip flop) is a fantastic way to keep a condom with you at all times, whether you’re drinking pina coladas at the tiki bar or playing volleyball. Basically, there is a shallow drawer in the sole of the shoe which slides out (like a wearable nightstand), and it is the perfect size for storing your ID and a Crown Skinless Skin. You know that giant stack of Solo cups you and your friends bring to the beach, in an effort to abide by the, “no glass allowed,” law? Well, a regular-sized condom wrapper fits perfectly in the bottom of one of these cups. Here's a little tip: put it in the second to last cup, just in case some wasted rebel takes a cup from the bottom of the stack and then runs around loudly showing everybody your hidden treasure. It happens. Anyone who has high end sunglasses or prescription glasses already has a hard case. These cases are great for keeping condoms safe from outside elements, like sharp objects. Additionally, it just looks like you are keeping your glasses safe, while really, you’re keeping you and your partner safe from unwanted pregnancies and STDs. So, live up to the stereotype of “smart people wear glasses” by being smart when it comes to your sexual and reproductive health. Most beach chairs and lawn chairs now have built in pockets and cup-holders. For instance, mine has 3 pockets, including a small pocket with a velcro closure which is intended for cell phone storage. This was the ideal place to stash my Caution Wear Black Ice condom. This method worked like a charm and no one was the wiser (well, maybe one lucky person was).

Love Box in your Backpack 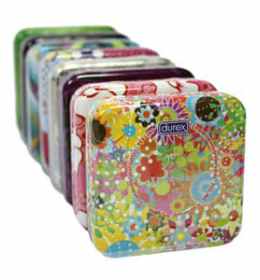 I love the Love Box from Durex for camouflaged condom carrying. It’s a fashionably patterned little tin that comes with 3 great Durex condoms already inside. This box is extremely durable and it keeps your condoms safe and secure, even when you store them in a crowded container, like a beach bag or a backpack. Plus, it is completely reusable and other brands of condoms fit nicely in it as well. Having 3 condoms is always better than having one, after all. You can even lend one to a needy friend, and you’ll still be ultra-prepped when the times comes.