The Kimono Microthin with Aqua Lube is my first Kimono condom, and I couldn’t have been happier to pop my Kimono cherry with it.

Japanese brands are known to have ultra-thin condoms, but Kimono is always at the head of the fight, with high-quality, super thin condoms that make you feel like you’re wearing nothing at all. 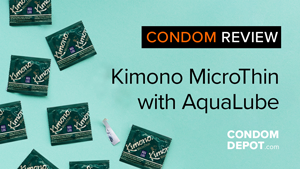 When I first unrolled this condom, the first thing I noticed was how light and thin it is. It seriously felt like it was going to shred between my fingers, and yet no matter how hard I pulled on it, it didn’t rip. Seriously, it felt as flimsy as saran wrap but when I tried to rip it with my hands, it didn’t budge, and it even felt stronger than cling wrap.

That’s really the great thing about Kimonos. They may not feel like much, but they have the strength of much thicker condoms. All the illusions I’d had about thinness = weakness were instantly shattered.

These condoms are slicked with lube – I had to wipe my hands off multiple times when applying it just so I could get a handle on it. The lube is Kimono’s AquaLube Natural, which, although plentiful, we found to pair perfectly if more is needed. Before we did that though, we each taste-tested these condoms to see how they were naturally. The lube itself had a slight flavor to it-- I can’t really describe what it was. These condoms aren’t flavored, but there was still a little bit of a sweetness to it. Not bad, and it majorly detracted from the latex smell, so that’s always a plus in my book.

In spite of any lube problems, we were particular impressed with how soft this condom was. While the thinness helped in making it feel like he wasn't wearing anything, it also helped transfer heat particularly well, and the softness of the latex made it even seem more like skin. We're both big fans of Lifestyles SKYN, which are made of polyisoprene, because they really do feel like skin. Up until now, we hadn't found a latex condom with comparable softness, but the Kimono MicroThin Ultra condoms come pretty close.

While the lube was less than satisfactory, both my partner and I thought this condom was amazing. While we will expand to trying out other Kimono products in the future, we’ll be sure to have some of these favorites on hand.

Even if the AquaLube is nothing to write home about, the thinness and softness of these Kimono Microthin with Aqua Lube condoms still makes my partner and I want to bring home a whole box.

"Wow a really great condom all you need is to be responsible and add more lubrication and you will have a great time." – Sheldon Lucas, Florida

"Greatest condom we have ever used! Fits like a glove. Ya almost forget that it's there. Back at the website now for a reorder!" – Bob, Michigan

"We added a little more lubricant to this condom and worked just fine for us. I am an average sized guys, so it was a nice fit for me. For you larger sized men, this is not the condom for you." – Jim, New York