I’ve never had the fortune to review a non-lubricated condom like the LifeStyles Non-Lubricated condom, and I gotta say, I wish more of my favorite condoms came with this option.

The benefit of non-lubricated condoms is that you get to add your own lube, obviously. And you should-- just because it comes non-lubed doesn’t mean it's supposed to be used that way. Lube is still an essential part of keeping a condom intact and doing the job it was meant to do. Now, like most non-lubricated condoms, these come with a mild, white powder on them. This is usually corn starch, and is used to keep the latex from deteriorating due to friction, much like what would happen if you wore more than one condom at once. It's completely normal and it won't hurt your body, but if you're using this condom for oral sex, you may want to wash it off first as it can have a strange texture in the mouth.

The LifeStyles Non-Lubricated condom itself is simple. No ribs, no studs, no fancy smells, tastes, or what-have-yous. It has no taste, is pretty much scentless (which is a miracle when it comes to latex condoms), and the only special feature is a reservoir tip. 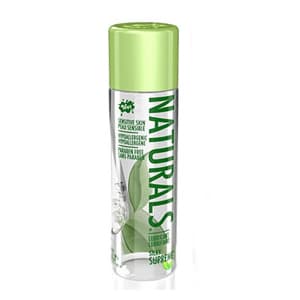 This condom comes in at 7.87" x 1.9", which makes it a fairly average size, if not a little long. My partner and I paired it with WET Naturals Silky Supreme, our favorite silicone-based lube of the moment, and found that it fit like a dream.

With our own lube, we loved the fact that we didn't have to worry about the potential ingredients of the lube the condom came with. We knew exactly what was going into and on to our bodies. I was informed when picking up this sample that the wrapper had recently changed, so if you get a package that isn’t reflected by what’s on the website, don't be alarmed. What once was a sort of silvery grey wrapper that said, “Ultra sensitive, non-lubricated,” now it’s a brown wrapper and with no ultra-sensitive label. Don’t worry-- it’s still the exact same condom.

You can make sure that you got the right purchase by checking the back. In printed letters along with the expiration date and and the lot number, it will say, “Dry/Non Lubrifie,” which means that it is non-lubricated. LifeStyles Non-Lubricated condoms have no bells, whistles, studs, rings, nothing. But if you have an aversion to pre-lubed condoms (especially if it’s a lube allergy), it's going to be the condom of your dreams.

"Our favorite by far! No smell, fits great (don't worry about the fact that it's "the widest on the market" if you're not particularly "wide"), and feels fantastic with a little liquid lube. If you don't like lubricated condoms, definitely try these!" Dane and Melanie - NJ