When guys are getting down and dirty with an ultra-sexy partner, lasting too long is not typically a problem. In fact, it is just the opposite. Since partners usually reach climax at different times during sex, it is somewhat polite (and just downright more fun) to go the extra distance to make sure your partner is as satisfied as you are. Women, in particular, may take longer to reach climax. For this reason, it can be really embarrassing slap to the ego to be thought of, or referred to, as a “two pump chump.” So, what can you do to increase your time on the field, you ask? It's simpler than you might think.

What are Climax Control Condoms?

The innovation of using benzocaine inside of condoms has allowed countless men to satisfy their lovers for a significantly longer amount of time than they were able to in the past. Before the advent of manufacturing condoms containing this mild anesthetic, men had to resort to thinking about unattractive images, practice tantric yoga or employ other mundane distractions in order to give their partner the timely devotion they deserve. Or, they had to buy a separate spray and apply it before donning a condom. Let's face it, when the time is right, who needs an extra step before taking action?

Today, the leading brands of climax control condoms are Durex and Trojan. Try Durex Performax Intense (with ribs and studs on the outside for your partner) and Trojan Extended Pleasure. These condoms contain a 5% solution of benzocaine which is located only on the inside of the condom, to prolong the pleasure of both you and your partner. As with any condom, make sure you put it on correctly so that the outer rim of the condom easily rolls down the shaft of the penis. The last thing you want is to slightly numb your partner instead of yourself. 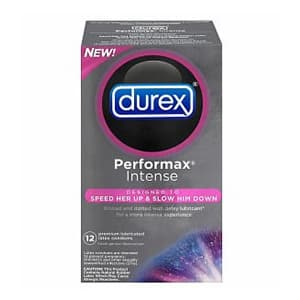 Of course, longer lasting intimacy and pleasure are just a few of the benefits of using a condom. Protecting yourself and your partner from pregnancy and STDs or STIs are incredibly important reasons to slip one on before you get going as well. So, the next time you think Old Faithful might erupt ahead of schedule, bust out your stash of Climax Control Condoms and maintain your cool. Don't disappoint, be on point! Your partner will definitely thank you for it!